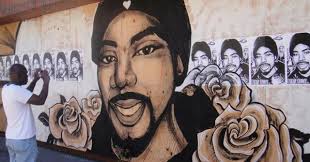 In 2009, a young man named Oscar Grant was savagely murdered for no reason. He was unarmed, he cooperated with the police, and was even trying to calm his other friends down; however, for whatever reason the two cops that worked for the BART station shot the man leaving his 4-year-old daughter fatherless. The video of the shooting is here. Once the footage went viral, a large amount of people began protesting for the murderer, Johannes Mehserle, to not only lose his job, but to be put behind bars for life. To the anger and disappointment of many Mehserle received a slap on the wrist, having to serve only two years in jail. This news angered people and again a protest happened.

However, the main disappointment came yesterday when news that Oscar Grant’s killer was going to be released after serving eleven months of his two year sentence. This is where I ask for you to really read my words and understand the pain of this news. A monster in a cop uniform, a monster with a license to kill, a racist monster murdered in cold blood an innocent man and he is punished as though he spilled some milk. This is unacceptable; this is not what “America” prides itself on. Oscar Grant is the victim, his family and his daughter who is probably 6 years old right now are victims of a system that refuses to see justice served. How would you explain to his daughter that her dad was killed and the monster that did it got away scott-free?

There is no right way to explain this to her because her country has told her that her father’s life is not of value, that her father’s life is not worthy for justice to be served over; despite not being related to Oscar Grant, as an African in America, his story clutches at my heart strings because America has just shown exactly what type of country is has been since the Europeans invaded it.

The reason that animal Mehserle got off is because he is white and he killed a black man. Anyone that wants to make excuses should leave now because this is not the blog for you. I don’t know why people especially black people are acting as though racism has magically disappeared because it hasn’t. Just 50 years ago we had the freedom riders having to go through hell and back just to sit in the front of the bus! America does not care for the black man or black woman! Heck they don’t care for people of color period! Remember Arizona? Yeah I thought so.

Since slavery black men were hung and castrated, black woman were raped and went through various forms of abuse all with America either making laws that supported it or giving the offenders a pass. Well it’s time for us to not let another Oscar Grant situation happen. This is our time to speak up and demand that America hear us or else she will not like the consequences. The days of being helpless are over; we built America to be what it is now (see how those white politicians start sweating when talks of reparations begin?) So why would we let her kill our children? I say to hell with that.

There is a petition going on now that is spreading requiring the signing of people to not let that monster see the light of day and I would hope that people would sign it. We need to wake up, America is slowly but surely going back to its racist roots and don’t think having a Black President means anything because at the end of the day the policies are the same, but it’s the faces on it that change. Simply put, President Barrack is a black face on white policies as a way to help get “his kind” on board.

Blacks in America and Blacks around the world, we have a voice and we have resources, we have the power to make sure we are heard. The time of hoping and wishing, and waiting is over, the time of seeking America’s approval is over, the mentality of “if you can’t beat them, join them” is over. Due to us chasing the material nonsense shoved down our throats we help America gross in practically billons or trillions of dollars when it comes to consumer items, be it fast food, cars, designer clothes, handbags, shoes, anything of luxury you name it. So why can’t we use this to our power?

I refuse to help a country that refuses to help me or my kind. Oscar Grant is one of the many blacks that have been unfairly killed; do you remember Emmet Till, Christopher Foster, Aiyana Jones, and the countless others?

So please sign the petition created by change.org, you have to sign up to sign it, we cannot let another innocent youth pass away and keep silent on it. Oscar Grant could be your son (eldest, youngest, or in the middle), your brother, your uncle, your father, your best friend, your husband, or your cousin.

One of JFK’s famous quotes is “Ask not what your country can do for you, but what you can do for your country.” I wish someone would have asked him when he said that, “Why should one do for a country that refuses to do for them?”